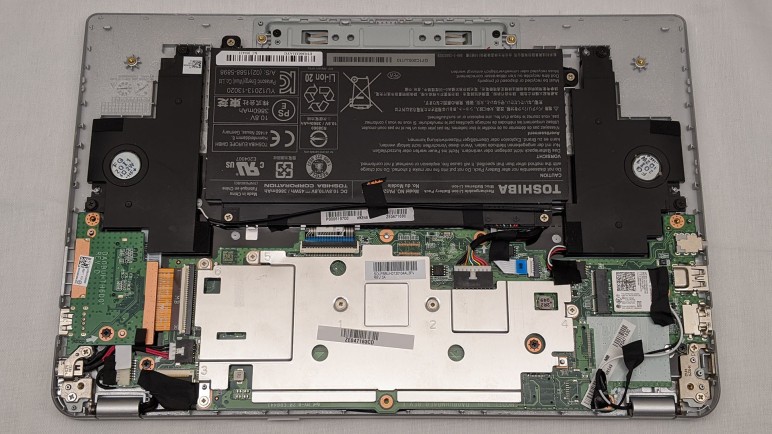 While I contemplate buying a replacement screen to bring this Chromebook back to function, I removed the bottom panel as well, just for a look. Ten screws held the bottom panel in place, two of which were hidden under two rubber feet. (Top two as shown in this picture):

Once removed, we could see the surprisingly roomy interior.

This was a relatively thin laptop for its age and screen size, so I had expected components to be packed densely. The battery, a single large module in the center, dominated the volume as expected. On either side are speakers, each with the luxury of the largest enclosures than I’ve ever seen in laptop speakers. Far larger than the volume allocated to speakers within the HP Split. I’ve read that interior volume for audio tuning is at an extreme premium, with sound designers fighting for millimeters, so it was a surprise to see this. And even with that use of volume, there are still room left unused near the corners.

I see the CPU, RAM, and flash storage are all tightly integrated and soldered on board. No RAM or storage upgrades for this machine, which is consistent with the Chromebook ethos. About the only core component not soldered down is the commodity WiFi card, which I interpret to mean there was little to no cost savings to integrate an unit.

I had known about Chromebook’s concept of reduced complexity, but it was mostly in terms of software and maintenance. Since Chrome OS was running a Linux kernel under the hood, I expected the hardware to be just as complex as any other laptop. But apparently not this one, which I found very interesting. Now I’m curious if all Chromebooks have electronics guts simpler than equivalent full PC laptops. If I have the opportunity to take apart more Chromebooks in the future, I’ll keep an eye open to see if this is actually common across all Chromebooks or maybe the simplicity of this model is just good work on the part of the Dynabook team which designed this Chromebook.

This was an interesting and instructive look inside the machine, time to put it back together and take stock of the current situation.