I wanted to see if I can employ my unused HP Stream 7 as an International Space Station tracker at home, displaying ESA’s HTML application. The software side looks promising, but I ran into problems on the hardware side. Specifically, power management on this little tablet currently seems to be broken.

The first hint something was awry is the battery runtime remaining estimate. It is unrealistically optimistic as shown in the screen image above: 46% battery may run this little tablet for several hours, but there’s no way it would last 4 days 4 hours. At first I didn’t think it was a big deal. Battery-powered devices that I’ve dusted off would frequently give wildly inaccurate initial readings on battery. It is common for power management module to require a few charge-discharge cycles to re-calibrate.

In the case of my tablet, a few battery cycles did not help. Battery estimates remained wildly inaccurate after multiple cycles. But I was willing to ignore that estimate, since battery life is not a concern in a project that intends to run tethered to power around the clock. The bigger problem was the tablet’s behavior when plugged in. 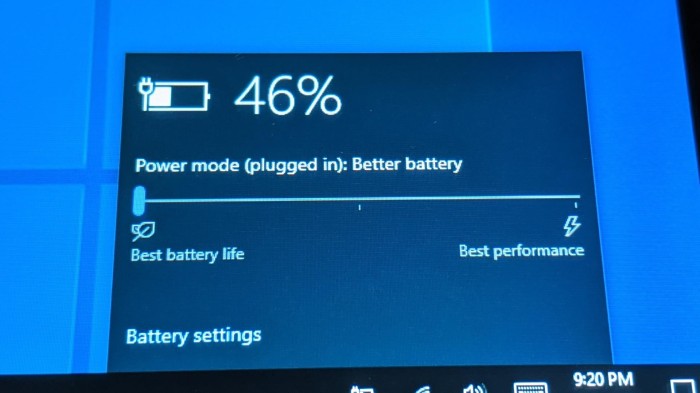 Once power is plugged in, the battery life estimate disappears and (plugged in) was added to the description. This is fine, but I had expected to see something about charging the battery and there was nothing. Not “charging”, not “2 hours until full”, not even the occasionally infuriating “not charging”. There is a complete lack of information about charging in any form.

Still I wasn’t worried: if the tablet wants to run off plug-in power and not charge the battery, that’s fine by me. In fact I am happy to leave the battery at around 50% charge, as that is the healthiest level for long term storage of a lithium chemistry battery. But that’s not the case, either: the tablet will run mostly on plug-in power, but still slowly drain the battery until it was near empty, at which time the tablet would power down.

Only after shutting down did this tablet begin to charge its battery. Now I am worried. If I can’t run this tablet on plug-in power alone, requiring a battery that can’t be charged while it is turned on, that combination would make it impossible to build an around-the-clock ISS tracker display.

What I wanted to do next was to poke around with the hardware of this tablet and see if I can run it without the battery. Fortunately, unlikely most modern compact electronics, the HP Stream 7 can be opened up for a look.