Once the power situation was improved to something more acceptable, I revisited the Z-axis end stop. Because the bare wire hack attached with tape was never going to cut it long term.

The first order of business was to transfer the circuit to a small circuit board instead of just wires hanging in the air. This little board was broken off from a larger prototype board, an easy task as the board was already perforated. The inexpensive switch I used (*) had two mounting holes that conveniently lined up to holes on the perforated prototype circuit board, so I soldered two pins at those locations as primary load bearers. I pushed the switch against those two pins as I soldered the three signal pins, hopefully this means any downward force from the homing procedure would be directed into the two mounting pins and not the three electrical pins. 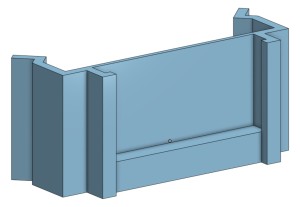 Once I had a small circuit board to hold the switch wired to the appropriate JST-XH (*) 3P (3-pin or 3-position) connector, I designed and 3D printed a small bracket to hold it to the machine. I saw no signs of how the original Z-axis may have been fastened, certainly no obvious holes to reuse. So I designed a clip-on bracket. The tool-less installation is a plus, but it came with the downside that it could not grip solidly enough to reliably hold a Z-axis position.

Right now it is sitting at the bottom against a cross beam, sitting at a height that I had guessed is relatively close to the original Z-axis end stop switch position. If that is too high, I will either have to print a shorter bracket or take a knife and trim some of the bottom off of this one. If it is too low, I can add something underneath this bracket to act as a spacer or print a taller bracket.

Now that I have the three-axis motion control portion of a 3D printer up and running, what can I do with it? I have lots of ideas! The first idea to be explored will be for visual dimension measurement.