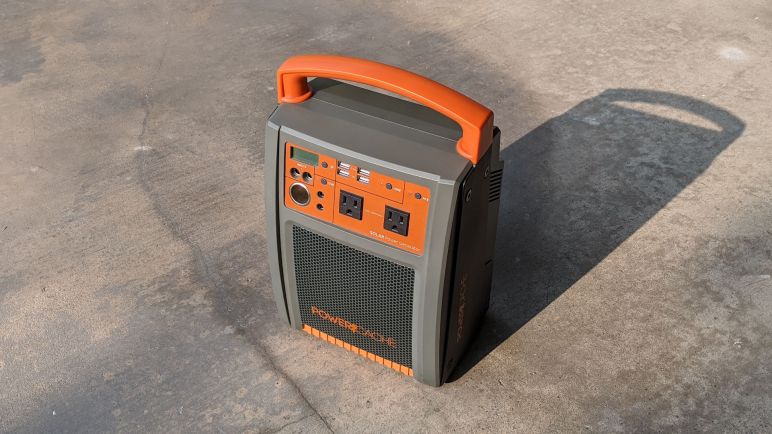 After a service life of over two and a half years, this Monoprice PowerCache 220 was retired due to its degraded battery and malfunctioning thermal protection system. I bought a Paxcess Rockman 200 to replace this old workhorse, which is now long out of warranty and has also been discontinued. Can I fix it? Should I fix it? I won’t know until I take it apart and see what I can find out.

The first step is removing side panels. They are held by hex-drive socket head fasteners that appear to be large durable machine bolts.

Once freed by a hex wrench, however, we see it was an illusion. Underneath the big beefy top is a short self-tapping screw fastened to the plastic. I don’t recall ever seeing a self-tapping fastener with a hex-drive socket head before today.

Once the tough-looking (but actually not) fasteners have been removed, the side panels could slide downwards roughly 1cm, then they can be freed.

With the sides removed, we’ll need to remove the rear fasteners. This is fairly straightforward, none are hiding behind labels. They are all self-tapping Philips screws in clearly visible recessed round holes.

Once those screws are removed, rear half of the enclosure can be lifted to expose the remaining attachment point: a wire harness for the cooling fan mounted in the rear enclosure.

It was easy to unplug the fan (looked like a JST-XH polarized connector) to get a clear look at the interior. Most of the available volume is allocated to a large sealed lead-acid battery. The battery is surrounded by a few pieces of foam padding, probably so it wouldn’t rattle around as the unit is carried around..

This PCB is dominated by large components we would expect to see in a power control application.

Attached to the aluminum heat sinks are power control MOSFETs.

The Golden Rule of Teardowns: Whenever an identifier is visible, put it into a web search to see what comes up. Unfortunately we’ve got nothing for SGD005-INV. In time, the search engines will find this page and send people here. I apologize in advance to those who come to this page seeking information I don’t have.

I was pleasantly surprised to see an easily replaceable fuse. It looks like a standard blade-style fuse popular in automotive applications. I feel it is on the lenient side as 35A * 12V = 420 Watts. I agree if this fuse blows, something has gone very very wrong, but I’m not convinced it’ll blow early enough to protect the rest of the device.

I had expected unpopulated debug points like the RX TX and GND visible towards the right, but the connection to the left actually had populated headers and that was a surprise.

I was encouraged by what I’ve seen so far. It all looks nice and tidy. If I can figure out the thermal problem, I should be able to restore this to full function with a new sealed lead-acid battery. Either way, the degraded battery needed to be removed. This was when I learned the foam padding was glued to the battery. I had hoped they could be easily transferred to a replacement battery, but sadly not.

Once the battery was removed it became much easier to move things around to get a better look. The temperature sensors are likely thermistors, and they have been held into a channel on the heat sink with some kind of glue that dried into a white blob. I had hoped maybe a sensor is misplaced, or dislodged, or unplugged, but it was none of those obvious problems. With those easy fixes ruled out, my prospect for repair dropped.

And once I flipped up the power PCB, my willingness to figure out the temperature problem also dropped. While one side was nice and tidy, the back side is a mess. I see lots of extra solder tinned to various areas on the circuit board, presumably to increase electric current capacity by some amount. And there’s some kind of white residue left all over the board presumably from soldering flux.

A quick web search found that this “heaps of solder” approach is not unusual for lowest-bidder circuit boards. Supposedly it is not terribly effective, but it does provide some benefit for nearly zero additional cost and thus sometimes chosen over any other “right way” approaches to solve the problem.

Not knowing the design constraints placed upon the engineers behind this product, I shouldn’t criticize. After all, it has worked well for over two and a half years. However, it doesn’t make me terribly fond of the device and given that the trivial fixes have been ruled out, repairing it has dropped very low on my priority list. Heck, let’s just say it has been removed from the priority list entirely.

Focus thus shifted from “evaluation for repair” to “satisfy curiosity and evaluate parts salvage.” Looking around the messy circuit board some more, I see the brains of the operation: the STM32F030K6 is a 32-bit ARM Cortex-M0 microcontroller, a cousin of the chip used in the “blue pill” development boards. Unsurprisingly, it is right next to the populated debug header pins I noticed earlier, though the traces don’t seem to go directly into the chip.

Looking past the power control PCB, I see another circuit board. Ah, yes, we would certainly need another board for the front panel status display, and on/off buttons.

Unplugging a few wiring harnesses gave us a better look.

The brains of this operation is a less powerful 8-bit chip, the STM8L052C6.

To give myself a little more room to work, all connectors to the power control PCB has been removed.

But it’s still too cramped, so I also removed the handle. This is a very sturdy handle that is also comfortable to hold. Attached with not just six screws but also molded-in channels to take up weight from the front and rear enclosure halves. Usually when I tear down retired products for salvage, the non recyclable plastic is sent to the landfill. But this time I’m looking at a sturdy enclosure with a handle and think there may be a second life for them.

Finally the control PCB is freed.

Not too many immediate candidates for salvage on the back side.

But the front is a different story. Multiple buttons and LEDs, plus four jacks. Two of them are common 5.5mm OD / 2.1mm ID barrel jacks, the other two are less common but matches the size used by Lenovo for some devices. Piezo buzzer, USB ports, all kinds of good stuff. I doubt I’ll find another use for the LCD panel, though.

I’m still very wary of 110V AC, but these sockets are so easy to salvage I might as well do so. I’m amused at the fact the grounding prong is left unconnected. A portable power source is not connected to ground, so of course there’s nothing to connect them to, but it’s still funny to see.

The 12V “cigarette lighter” socket is very likely to find another use. I wanted to salvage this connector but it was not obvious how. It took me a while to figure out what I was looking at, the answer is that the entire outer base is the “nut” holding the socket in place. In order to remove it from the panel, I had to turn the whole exterior counter-clockwise. And before I could do that, I had to break away most of the solidified orange adhesive.

Nonstandard size meant I had to dig through the tool box for pliers and vise grips of the right sizes to grip without crushing the thin metal exterior can. But eventually it was freed, and the socket could be removed from the panel.

Using earlier pictures as reference, I plugged all the electrical connectors back where they were. Then the mechanical components were laid out for this final roll call without the battery.

Out of all the electronics, I believe the cooling fan will be the first to find a use somewhere, followed by the 12V socket. But I’m actually more intrigued by the enclosure. It is sturdy, already designed to carry something heavy, has provision for cooling, has a big confidence-inspiring handle, and soft rubber feet cushions impact when I set down the box. I think I will cut away the front panel and replace it with something 3D-printed or laser-cut, and the rest of the… whatever it will be… can be installed inside the box. There are lots of potential here.