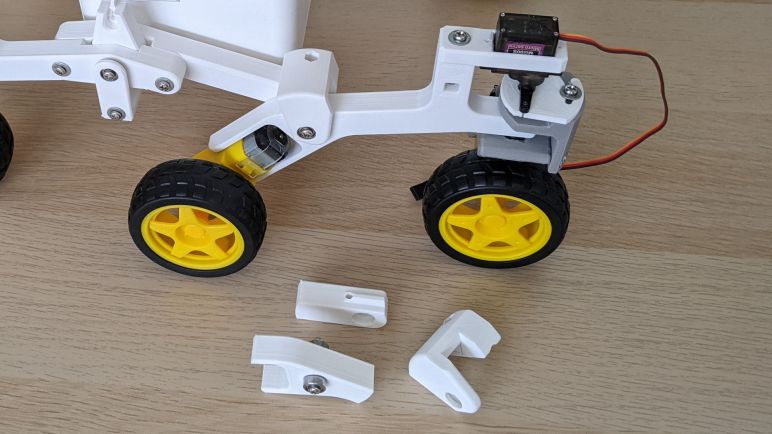 A quick strength test of SG90 micro servo found that it was pretty fragile, but before I worry too much about mitigating that problem I wanted to get more real world runtime on Micro Sawppy Beta 3 (MSB3) to see if such work is even necessary. In order to get that real world runtime, I should focus on continuing design work on the rest of the rover. Next stop: the suspension bogie.

Most of changes to MSB3 bogie reflects the switch to using TT gearmotors to drive the middle wheel. Compared to those changes, work to accommodate new steering joint and servo mount were relatively minor. The final change was mechanically simple but has a big impact: following the precedent set by steering bearings of MSB3, the bogie bearings mount were also changed around. Now, instead of a M3 fastener running through the center of bearings as a rotational axle, the M3 fastener now securely bolts down the center to be static relative to the bogie and the motion is around the outside.

Again the major advantage is making this rover much easier to build and maintain. We no longer have to worry about the amount of torque used, as it no longer affects smoothness of bearing motion. A rover builder can torqued down these M3 fasteners to their heart’s content and it wouldn’t affect rover behavior.

As part of this change, the C-shaped bracket to prevent bogie over-rotation is no longer a simple clip-on piece of plastic as it was on MSB1 and MSB2. It is now a structurally important part of the rocker-bogie joint, supporting the weight of outer bogie bearing. There’s a good chance this bracket on MSB3 is bulkier than necessary, but I wanted to verify the idea works before slimming it down. It’s already taken way more effort than I thought it would take to get this point.

I need to sit down and simplify the bracket’s geometry. Its shape is dictated by the bogie’s allowable rotational range of motion, and I think that math got away from me. There are far too many numbers and guide lines in the CAD sketch. It took several small test samples to work through this geometry and my mechanical intuition says there should be an easier way. Fortunately the bracket is small and quick to print making iterations fast. Hopefully that mythical “easier way” will come to reality once I dedicate some time to stew on the problem for a bit. For right now, I’m content to use this design for attachment to MSB3’s suspension rocker, starting with the single-piece version.