The first experiment in PETG was printing a servo coupler. It was small, printed at 0.1mm layer height. After the success of that initial experiment, I set the printer to work on a Sawppy rover wheel overnight at 0.3mm layer height. It did not turn out well. 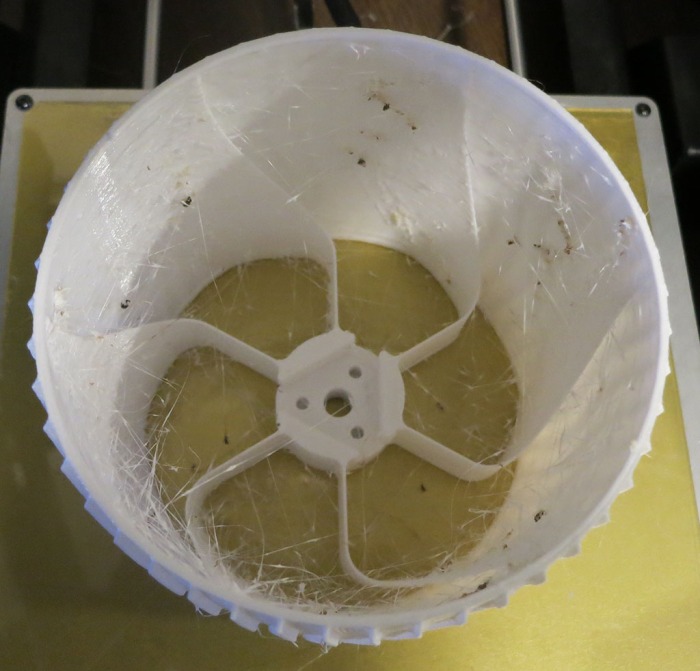 Little bits of extraneous PETG strings all over the place! Stringing is usually credited to poor retraction settings, but that’s not the whole story here. Once this print gets above the first 20mm and no longer printing the center hub, it no longer performs any retracts – the wheel is printed in a continuous motion without retracts.

What these strings actually demonstrate is not poor retraction, but very poor layer adhesion. As the print head circles the perimeter laying down filament, it’s not all sticking and instead dragging along little bits of PETG causing these strings. It’s not very visible from this camera angle, but there are visible gaps between layers. And the layers came apart with only minor physical handling.

The layers came apart more easily in the middle sections. This was puzzling – what problem would be worse in the middle of the night but magically recover by morning? The answer: ambient air temperature. Apparently PETG needs more time than PLA to properly bond with the previous layer, and when cooled too quickly it won’t bond. I can’t change the weather on command, but I could turn off the print cooling fan.

Turning off print cooling helped somewhat, but it was not the whole solution. PETG melts less easily than PLA, which is a desired feature when it comes to rover parts that don’t deform under heat. But that attribute also creates printing headaches. The 0.1mm layer height print bonded well but the 0.3mm print did not, leading to the hypothesis that the print nozzle couldn’t melt PETG fast enough to deliver triple the volume of plastic.

To test this hypothesis, the print speed was cut to 1/3 of previous speed. The test object worked well, but this print speed is not acceptable. It would turn a rover wheel from an 8-hour print project to an all-day 24 hour print!

Another test is to turn up the heat on the nozzle, hopefully a hotter nozzle will melt PETG more quickly. This worked… briefly. It got too hot for the liner and it deformed, jamming the print path.

The liner was original so perhaps it was just time for a replacement anyway. But when the replacement liner also jammed up within a few prints, I knew this was not going to work.

Given these data points, the hypothesis of “hot end couldn’t melt PETG fast enough” has merit. We know slowing down works, but is unacceptably slow. We know heating up works, until the liner quits.

I was not willing to accept the slowdown, so the alternative is to upgrade the hardware.