I brought an old LED light bulb to a SGVHAK meetup for an educational dissection. This bulb has illuminated my front porch for several years, hooked up to a light-sensitive fixture that turns on the bulb when dark, and turn it off when the sun is up. However, when illuminated this bulb has started flickering. At first it was a mild pulse that I didn’t mind very much as I don’t usually need the light myself anyway. But after a while, the blinking started getting annoying and even the bright pulses were too dark for the light to serve its intended purpose. This bulb was retired, and now we take it apart to see what’s inside.

Looking inside the cooling vents, we can see there are two circuit boards mounted at right angles to each other. Obviously there will be LEDs soldered to these boards, with a power supply at its base. Since all the LEDs pulsed together, we expect there to be a power supply failure and hope we might be able to see what component caused the problem. 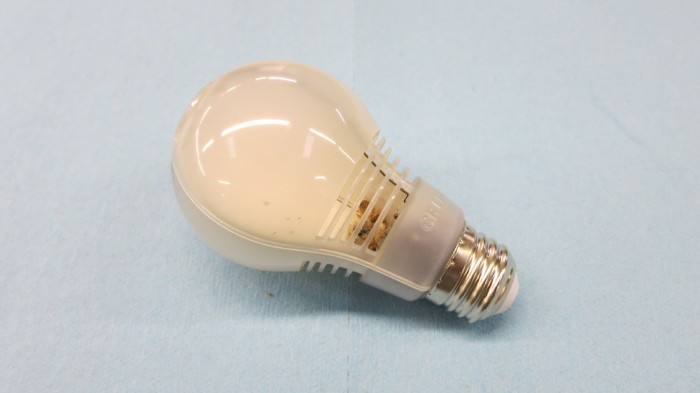 Here’s the label on the bulb. This was not a bargain basement device, it was a dimmable bulb and it was also designed to be usable in damp environments as the front porch is occasionally exposed to rain. It was also exposed to outdoors wildlife, including some insects who have climbed inside and sadly died there, too.

It was nicely sealed with no obvious way to take apart the plastic housing nicely, so out came a beefy cutter and we start cutting from top vents. 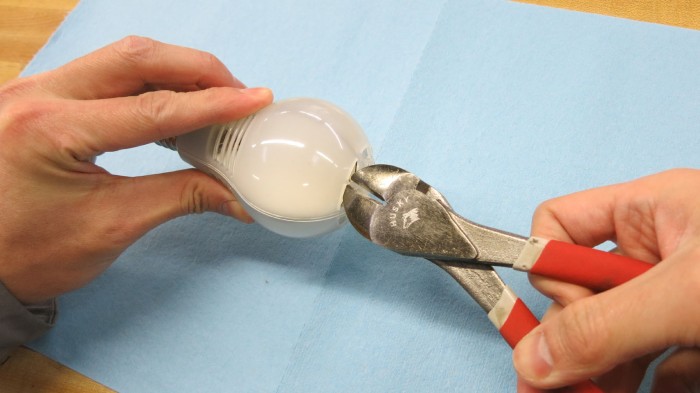 Once the top vents were clipped open, we could perform some literal debugging of our device by pouring the dead carcasses out. They look like honeybees.

Aside from debugging, the opened top also lets us see more details inside. Sadly, there were no visible mechanisms for easy release, so cutting continues at waist-level vents. 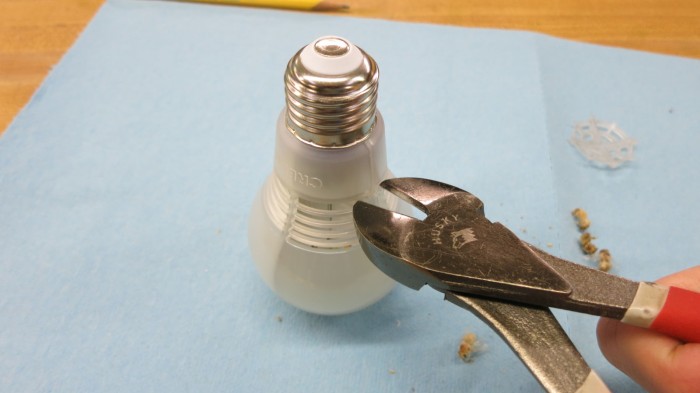 Once those portions were cut away, we could see more of internals. There were fewer LED surface mount packages than we had expected.

At this point I ran out of convenient places to cut with a hand tool, so cutting moved on to a band saw.

Once the band saw cut through all around the base of transparent plastic bulb exterior, we were able to free its internals for a closer look. Surprisingly, the circuit boards connect to each other and to the base with tiny spring-loaded connectors rather than a direct soldered joint. One hypothesis is the bulb was not only designed for humid environments, it was designed to sustain vibration as well. Another hypothesis was that humid environments also imply a larger temperature swing, where spring-loaded connectors can accommodate thermal expansion/contraction better than soldered joints.

Here is the main board’s topside. Nothing appeared obviously damaged. The big electrolytic capacitor immediately drew our attention, as that is the type of component most likely to fail with age. However, the usual signs were absent. No leaking electrolyte, no bulging of the body, and no breakage in the top. With the help of our multi meter, we could tell the capacitor has neither failed open or failed short. We also measured its capacitance, which won’t be a reliable number as the capacitor is still installed on the board: we’d be measuring capacitance of the capacitor as well as the board it is installed on. But the number was roughly in the ballpark of the rating printed on its side, so it looks clear on all counts.

Bottom side of the main showed no such obvious attention-getters. The small light colored surface mount component at the base might be a safety fuse, and it tested OK for continuity.

We explore the fewer-than-expected LED modules by trying to power up a single LED using a bench top power supply. At first it stayed dark and we thought maybe the LEDs were at fault instead of the power supply. But then we realised we weren’t giving it enough power: we were surprised it took over 24 volts before a single module would illuminate.

An explanation surfaced once we adjusted camera settings to see individual light sources inside the package: there are actually ten LEDs in each package, in a three + four + three configuration. This explains how it could be so bright with so few surface mounted modules!

At this point we’ve verified all the discrete components we understood and could test, we’ve removed dead bug remains that might have caused problems, and we cleaned up all the electrical connectors. Maybe that’s enough to bring this bulb back to life? 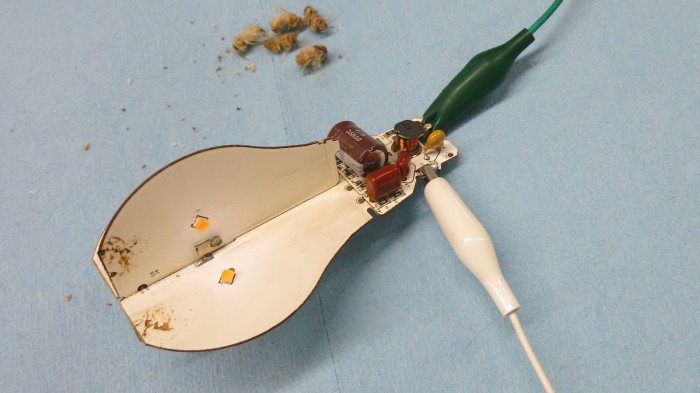 Sadly, the answer was no. We hooked it up to AC power and plugged it in: it is still dim and blinky. Obviously we failed to understand how this particular bulb works – the power supply circuitry was far more complex and sophisticated than we had expected. But still, it was fun to look inside a premium (for its day) LED bulb.

Tonight at #SGVHAK: This old LED light bulb dates back to the time when such dimmable units were $50 each. Something is wrong with its power supply. We couldn't figure out which specific component failed, but we had a lot of fun trying. pic.twitter.com/7zX1D8Vsm7