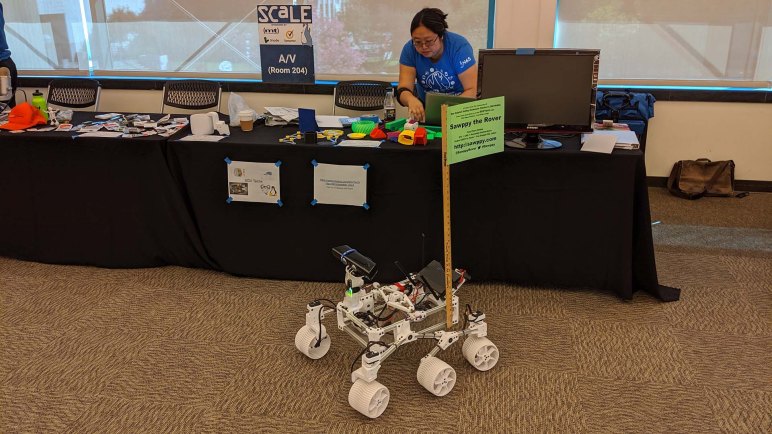 The city of Pasadena is fortunate to have an organization like Innovate Pasadena to build a community of companies and organizations around Pasadena. The city is large enough that people don’t always know what’s literally down the block. The flagship event is open to the public, to try to get everyone involved. This is Connect Week, a week long event in October filled with events that open doors and hopefully form connections.

Sawppy’s participation in Connect Week is the Maker Festival held at Pasadena City College (PCC). Representing one of the many subsets of San Gabriel Valley Technology enthusiasts (SGVTech.) Sawppy’s nominal job for the day is to roam around, get people’s attention, and direct them to the SGVTech table for more information.

Sawppy wasn’t the only rover present, though. SGVTech’s neighboring table represents JPL and one of their Open Source Rover was also present. This is the exact same rover present at Sawppy’s first public outing.

I was a little disappointed at how many people suggested the rovers fight each other. These are robots celebrating exploration, science, and knowledge. They are not combat robots. I am not a fan of Battle Bots, Sumo Bots, or derivatives thereof and I wished these combat-oriented robots didn’t have such a high profile in people’s minds.

For the immediate future, the best thing I can do to raise the profile of non-fighting robots is to show off Sawppy to more people. Hopefully seeing that there’s more to hobby robotics than battle bots will open people’s minds about it.