Once our new CNC spindle passed initial inspection, it was time to get to work mounting it to our Z-axis linear actuator. Again, the piecemeal nature of this machine meant the parts would not bolt up directly so we’ll need to fabricate another adapter plate. This meant cutting another piece off of the same 1/8″ aluminum stock used to mount the Z-axis on our gantry and marking up the dimensions we’d need.

Four holes were drilled to line up with the actuator extrusion beam, and four more drilled to line up with the motor mounting block that was part of the spindle package. The original plans were to use bolts and nuts across the board, but there was a problem with clearance: the motor mounting holes were almost exactly the width of the Z-axis rollers, leaving insufficient clearance for either M6 nut or bolt head.

The obvious solution was to tap M6 threads into the aluminum, avoiding the need for nuts and associated clearance. Unfortunately we had no M6 taps on hand, but [Emily] the resourceful improviser had a trick up her sleeve: We had plenty of M6 steel bolts, and we wanted to tap aluminum. Steel is harder than aluminum, and so with some modifications with the grinder, she turned one of the M6 bolts into a functional M6 tap. 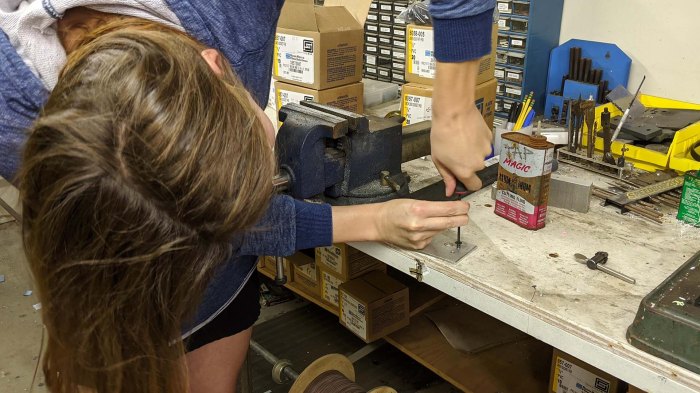 Bolting directly into newly tapped aluminum, our M6 bolts would still just barely scrape the Z-axis roller assembly. Switching to thicker washers gave us the spacing needed to clear the rollers, allowing the spindle to move across the entire range of motion on our Z-axis. 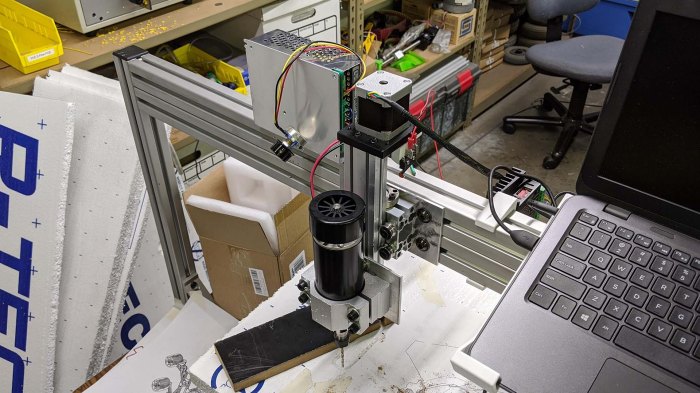 As a quick test, we mounted an 1/8″ drill bit into the spindle and performed the ceremonial first cut of this machine. I was moving the Z-axis via manual jog controls in bCNC, we still have a few more things to take care of before running this machine under automated program control.

Ceremonial first cut via manual jog controls. Still lots to do before we dare set it loose running a G-code program… twitter.com/i/web/status/1…