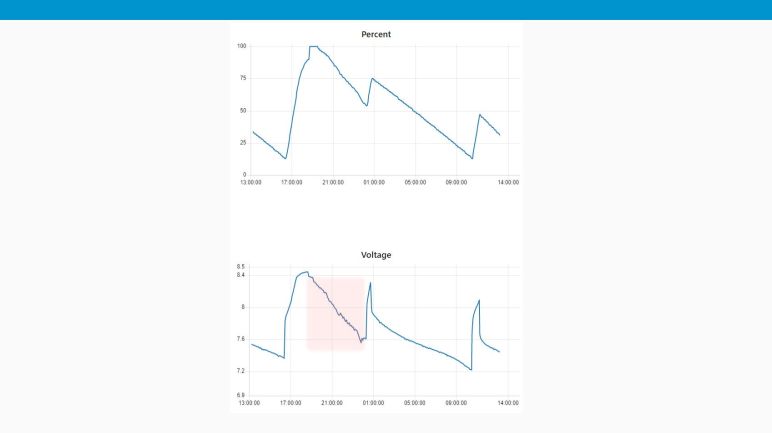 I’ve set up my unloved Samsung 500T tablet to display the current position of the International Space Station around the clock. This was a very steady and predictable workload for the machine, which made it the perfect solar power test subject. Since the time I devised a first draft of a strategy for maximize solar power runtime, I’ve been tweaking it as I go.

The tablet has behaved predictably over several weeks, so I could test different times to connect/disconnect from the solar panel and maximize storage time while also keeping the battery state of charge between 20% and 80% to maximize its cycle life. It’s not a very precise experiment on my end because I’ve been connecting and disconnecting power manually. An automated solution is in the future, once I’ve figured out what I want to do.

Things were going well until Tuesday of this week, when my power scheme went awry. First problem was that I neglected to disconnect power when it reached 80% SoC, that was on me. But then I ran into a second problem: the power consumption was extremely erratic after I disconnected power to the tablet (area highlighted in red.) As far as I knew, I did nothing to trigger any change in behavior, and the tablet isn’t displaying anything other than the ESA ISS Tracker. What’s going on?

The keyword is “Tuesday”, more specifically, it is the second Tuesday of the month when Microsoft pushes out security updates for Windows. On my other Windows computers, Patch Tuesday takes only a few minutes to download and install. But the Samsung 500T is so slow, patch installation is a drawn-out multi-hour affair. During which it consumes significantly more power than just displaying the ESA ISS tracker.

This episode reminds me of the value of long term testing, and that my Samsung 500T solar power strategy will need to allocate more power on the second Tuesday of the month.