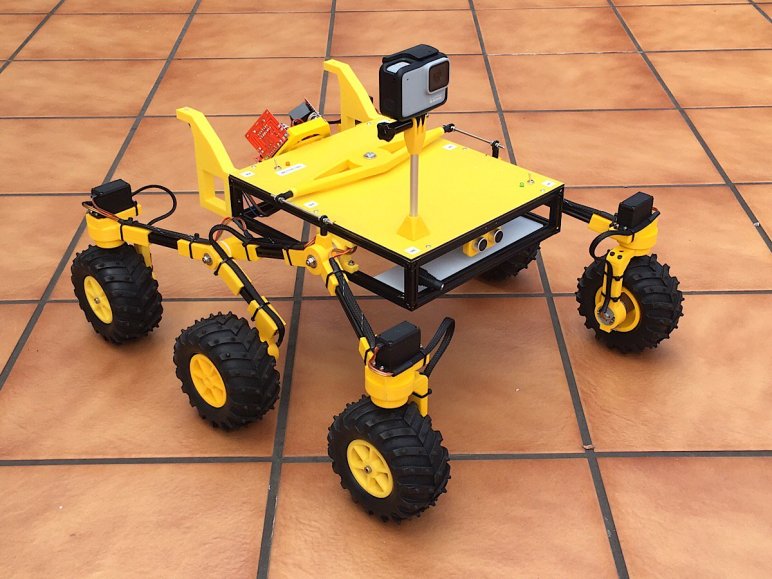 Next stop in the world tour of 3D-printed fan rovers is Spain (or at least a Spanish-speaking nation) home of Bricolabs Technology Laboratory. (BTL) In contrast to the sophisticated visual fidelity of Frédéric Jelmoni’s rover, Bricolabs went down the path of clean minimalism for their Curiosity BTL rovers.

Yes, rovers plural. For there are two variants of Curiosity BTL: A small 1:10 scale and a larger 1:5 scale. The larger 1:5 scale version uses tires that are available from Pololu and other sources. They resemble the remote control monster trucks tires used on the JPL Open Source Rover, but on this rover they are mounted on 3D-printed wheel hubs. Those six wheel hubs fasten directly to the output shaft of six gearmotor for six-wheel drive. The four-wheel steering duties are handled by full-size (?) remote control hobby servo motors. Thankfully, rather than making the servos handle all of this workload, Curiosity BTL 1:5 includes bearings for their steering joint.

Full rocker-bogie suspension geometry is present and accounted for, with suspension arm segments and the body built out of aluminum extrusion beams of 10mm x 10mm profile. All 3D-printed components were designed in OpenSCAD and these sources files are available alongside 3D-printing STL files in its GitHub repository.

The smaller 1:10 scale rover is even simpler. No aluminum extrusion beams are involved, the entire thing is 3D printed. Wheel drive gearmotors drop down to N20 type gearmotors. Steering duties are handled by micro servos and now they must function without bearing assistance. I’ve used the little 9g micro servos that look like those in the picture, and they have an incredible amount of play in the geartrain which would have led to some very wobbly corner motors. Perhaps the ones visible here are of higher quality.

The wheel hub is also 3D printed and fit directly to gearmotor output shaft, but instead of a commercially available tire the little one has grousers that are 3D printed separately, optionally with different color and material. Again, all STL and OpenSCAD files are available on GitHub.

In the Curiosity BTL family portrait, they are posed alongside the LEGO IDEAS Curiosity rover.

With a common architecture of DC motors on the wheels and RC servo motors for steering, it appears both rovers share the same electronics architecture. An Arduino Mega sends out steering servo signals directly, and also control three DC motor drivers each of which controls two of the driving wheels.

I quite like the simplicity of Curiosity BTL rovers, making them easier to build and accessible to a wider audience. However they do lack a few features that I desire in my own rover, something I keep nitpicking on other rover designs: I want ball bearings on my rotational axis! Designers for these rovers have largely decided the bearings to be extraneous, or that bearings already in their servos/gearboxes are sufficient. This is a valid design decision and is used on other rover designs like Ryan Kinnett’s Micro Rover.

Posted in Sawppy the Rover, Window ShoppingLeave a comment