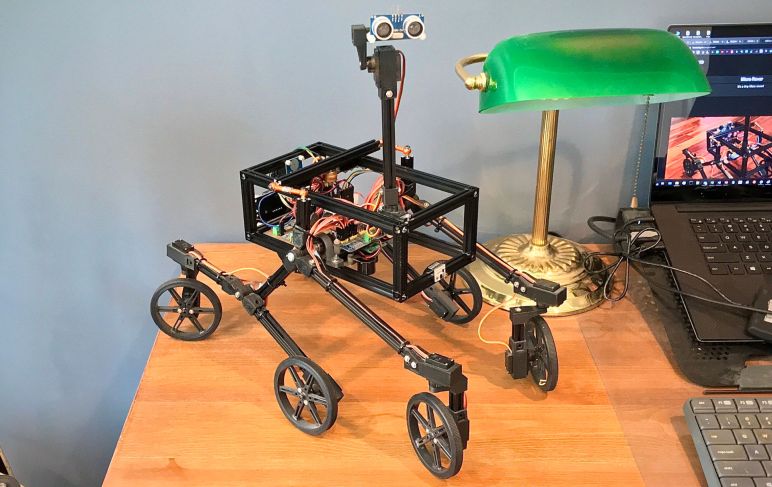 A remote control hobby servo’s job is go to its specified rotational position and hold that position until told otherwise. They aren’t designed to take on non-rotational forces such as weight pressing perpendicular to the axis of rotation. But I have to admit it can be a simple and effective approach for small lightweight robots. It was used for corner steering on the 1:10 scale variant of Bricolabs rovers, and it is also used for all steering and wheel rolling motors in Ryan Kinnett’s Micro Rover project.

In the project description, Kinnett claimed to be unaware of Sawppy when starting this project, so this is another rover with no relation to Sawppy but coincidentally share many similarities. One difference is that these servos were not serial bus servos. Listed as “micro servos”, they look superficially like the metal-gear variants commonly sold under the MG90S moniker (*). I’m sure MG90S was somebody’s actual model number at one point, but now it has become a generic name with many similar but not identical implementations from different manufacturers.

For structure, Kinnett and I used the same approach in our rovers: aluminum extrusion beams to form the main body equipment bay, and similarly for our rocker-bogie suspension. 3D-printed parts then hold all of them together in the shape we want. We were even in agreement in using remote control car suspension adjustable turnbuckles for our links to connect the rocker pivot to differential bar. Speaking of which, Ryan was smart enough to use an extrusion beam for differential bar. When I designed Sawppy I was ignorant of how much stress that component had to bear and thought an 8mm bar of steel would suffice. I was wrong! When the bar started bending, I had to create a brace for it.

At first glance I thought this Kinnett rover was about the same size as my Sawppy, but once I learned the servos were smaller MG90S (or similar) servos and the beams were 10mm x 10mm MakerBeam (non-XL) my frames of reference changed and I realized it was much smaller. Several Sawppy builders unable to obtain Misumi HFS3 used the 15mm x 15mm MakerBeam XL as substitute, so I guess that makes this micro rover 2/3rd the size of Sawppy.

One especially novel bit of side trivia is that Ryan Kinnett isn’t just a fan of JPL Mars rovers, he was actually on the operations team for Mars Science Laboratory a.k.a. Curiosity rover. So this Micro Rover not just a fan project, it was also taking a little bit of work home. Ryan Kinnett heartily endorsed Sawppy on the Micro Rover project page, and seeing that support from someone who works with the real thing… I consider it an extreme honor.

Naturally, with all the engineers and scientists working on the leading edge of Mars exploration, there are more rovers build by people affiliated with real spaceflight hardware. Like European Space Agency’s ExoMy rover.