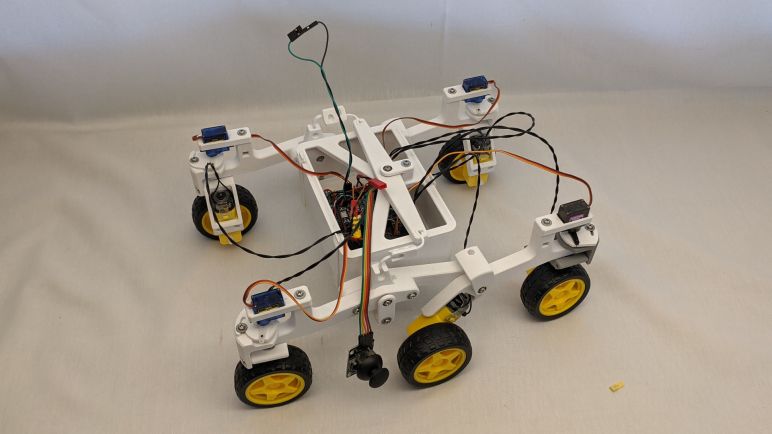 Micro servo angle position inconsistency probably won’t damage a rover, but power problems will. When I decided to use an ESP32 dev module as the brain for my Micro Sawppy rovers, I did not anticipate that power would be a recurring headache in multiple contexts. One context is the fact that my rover has its own power source from a battery, and my computer has its own power source. The problem is that a ESP32 dev module’s micro USB power would tie those two power planes together, and this is not a recipe for success. So I have to be careful to disconnect those two power sources every time I plug in a micro USB cable to update software. Because a computer’s USB port will not have enough power to run a rover, and the rover’s battery must not feed its power into a computer’s USB port.

For my initial breadboard prototype, I took advantage of the solid core wires I used there to build a physical exclusion mechanism. I couldn’t quite carry that feature over to my current perforated prototype board with soldered connections. But I did solder in provision for a jumper to connect ESP32 power to rover battery, and I have to remember to remove this jumper before I plug in a micro USB cable.

To make this jumper more visible and more easily removed, I bought a pack of bright yellow jumper with tall pull tabs. (*) This turned out to be not enough. The tab didn’t really stand above the nest of wires on my prototype board, and it is even harder to access when the prototype board is placed inside my rover’s body. The solution: two jumper wires.

Now I use two lengths of jumper wire, whose top connector rises far above the fray for me to easily access and, almost as importantly, easily seen. I could pull the wires apart for USB uploads, but this leaves a pin dangling about, carrying voltage that might cause problems if it touched anything. So I replaced the single position socket with a three-position socket, the far empty slot holding a connector crimped to no wire. This non-connected position allows me to store the pin when power is disconnected in order to use the micro USB port.