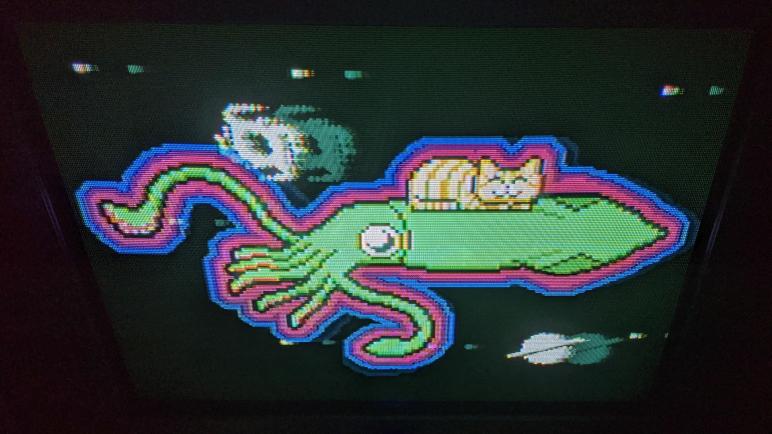 Emily Velasco whipped up some cool test patterns to help me diagnose problems with my port of AnimatedGIF Arduino library example, rendering to my ESP_8_BIT_composite color video out library. But that wasn’t where she first noticed a problem. That honor went to the new animated GIF she created upon my request for something nifty to demonstrate my library.

This started when I copied an example from the AnimatedGIF library for the port. After I added the code to copy between my double buffers to keep them consistent, I saw it was a short clip of Homer Simpson from The Simpsons TV show. While the legal department of Fox is unlikely to devote resources to prosecute authors of an Arduino library, I was not willing to take the risk. Another popular animated GIF is Nyan Cat, which I had used for an earlier project. But despite its online spread, there is actual legal ownership associated with the rainbow-pooping pop tart cat. Complete with lawsuits enforcing that right and, yes, an NFT. Bah.

I wanted to stay far away from any legal uncertainties. So I asked Emily if she would be willing to create something just for this demo as an alternate to Homer Simpson and Nyan Cat. For the inspirational subject, I suggested a picture she posted of her cat sleeping on her giant squid pillow.

A few messages back and forth later, Emily created Cat and Giant Squid complete with a backstory of an intergalactic adventuring duo.

Here they are on an seamlessly looping background, flying off to their next adventure. Emily has released this art under the CC BY-SA (Creative Commons Attribution-ShareAlike) 4.0 license. And I have happily incorporated it into ESP_8_BIT_composite library as an example of how to show animated GIFs on an analog TV. When I showed the first draft, she noticed a visual artifact that I eventually diagnosed to missing X-axis offsets. After I fixed that, the animation played beautifully on my TV. Caveat: the title image of this post is hampered by the fact it’s hard to capture a CRT on camera.