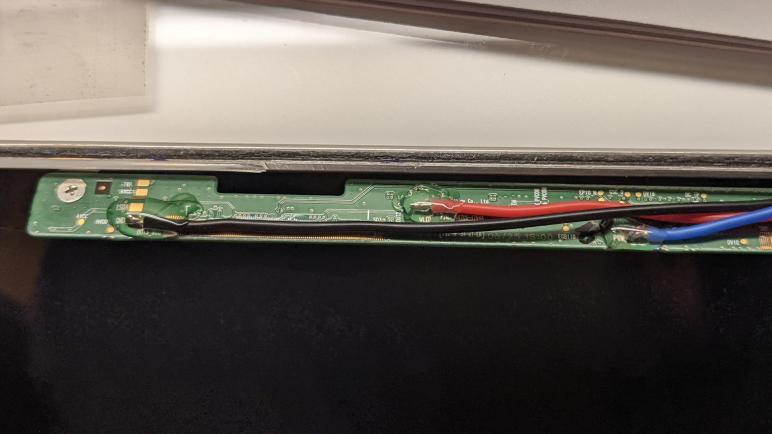 I had thought I was near the finish line for my backlight revival project, but then I tugged on one wire a little bit too hard and destroyed the circuit board test point I had soldered to.

This is bad, and it got worse. As I tried to gently unwind this LED_EN wire, it was not gentle enough and the soldered points for Vin and GND started unraveling as well. For those two wires I had soldered to either end of a (relatively) large surface mount decoupling capacitor bridging those two voltage planes, because the tops of these capacitors presented a metallic surface area for me to solder to. I had thought they were metal end pieces, but they were actually a thin layer of metal that I just learned would peel under stress. The good news was that I was able to melt the solder and remove those wires before they did any permanent damage, the bad news is that I’ll need another approach for these connections as well.

Since I’ve already proved to be clumsy with three out of four wires, I pulled out my hot glue gun to better secure my solder points starting with my PWM wire that still remains. I dropped a dollop of hot glue and, as I pulled my hot glue gun away, I felt the now-dreaded “pop” sensation in my fingertip holding the wire in place. I think I just lifted the PWM copper pad, too! Fortunately, my meter said I still had electrical continuity. So even if I did lift the pad, it is still connected, held in position by my drop of hot glue. But just in case I needed it, I probed around the board and managed to find a backup location for the PWM signal next to the main display control chip.

Backing up further, I found another test point to the left of the LED_EN test point I destroyed. It was labeled VLED and it was connected to the backlight supply voltage line. As fragile as these test points have proven to be, I think they’re still better than the end of a surface mount capacitor. I’ll use this one and hope I don’t rip this one out as well. Finding a replacement location to solder to the ground plane was easy, as the entire circuit board shared a common ground plane and I had many choices for ground. Including the metal housing of the now-unused data connector that formerly connected to the rest of the laptop. So I’m not worried about a ground connection, I have a plan C, D, E, F, etc. For now I found what looks like a test data bus will use the ground pad for that.

Which leaves me with the original problem: the LED EN pad that I’ve destroyed. I had no luck finding another test point, and while I expect it is connected to one of the pins on the main LG Display ANX2804 chip, I couldn’t find a good contact point for that either. Then I remembered the TPS61187 datasheet, where it said it was valid to connect EN to VDDIO which will cause the chip to be enabled whenever it receives power on Vin. From my notes probing the components around the chip, I knew there were some surface mount components adjacent to each other. They are tiny, but I was able to get a short length of wire to solder across those two components. Since I won’t be tugging on this wire, I should be OK here.

After I verified the VDDIO and EN pins are now connected, I realized there was another way: Since these two pins are adjacent to each other on the TPS61187 itself, a blob of solder can theoretically bridge those two pins right on the TPS61187. I’ll keep that in mind as a potential plan C if I should need it.

To minimize the chances I’ll need any of those backup-to-the-backup plans, I became very generous with my hot glue application. I sincerely hope I won’t have to take this apart again, because I don’t see how I can undo all this hot glue without destroying these solder points.

Fortunately I wouldn’t have to undo anything because my second attempt at system integration was a success.