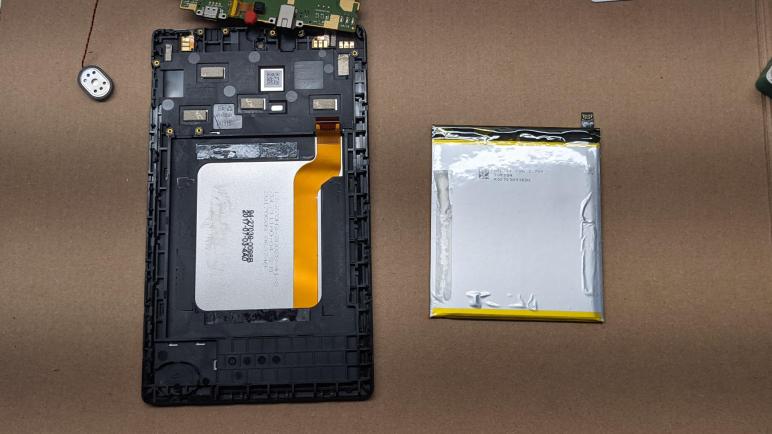 After I moved the mainboard more-or-less out of the way, my next objective was to remove the glued-in battery. This is not just annoying, it is potentially dangerous as lithium polymer pouch batteries like these aren’t very fond of gross physical abuse. And they have a history of protesting their displeasure with a fireworks show in your face! There were two ways forward: I could leave it alone and hope it doesn’t block anything important, or I can remove it now to uncover whatever is underneath and remove a point of volatility from the project. I decided to remove it.

The battery is pretty much surrounded on all sides, but I saw Amazon engineers left a small opening as an entry point. Here it is marked after the fact.

I didn’t see an applicable tool in my iFixit repair toolkit, so I cut apart a piece of thermoformed plastic packaging for a thin and flexible spatula to dig in. I found the bottom strip of tape, and after that I was freed, I could work my way around to free the battery from the remaining three strips. That is a total of four strips of double-sided tape, one for each edge of the battery.

Thankfully the battery did not explode in my face, but I’m not entirely sure it came out unscathed, either. There were some very definitely flexing as I pulled it freed from these four tape strips, because at the time I didn’t know exactly where they all were. Perhaps with a bit of hindsight I could free the battery while putting less stress on it, but I could at least document my findings so maybe the next person who sees this can treat their battery better.

During all of this yanking and pulling of battery removal, I flexed the touch digitizer cable one too many times and it broke. Oops. Well, at least now the mainboard has been completely freed from the case.

Earlier I thought this Kapton-covered segment might have been soldered to the board and didn’t want to pull too hard. Now that I’m no longer worried about damaging this already-damaged part, I stabbed a flat tool in there to release the bond. It turns out there was no soldering, just a piece of tenacious double-sided tape.

There were a few other trivial items accessible from the back of the tablet, including the external speaker, microphones, and switches for external buttons. I was moderately curious about these items, but I had actually hoped to find something that would help me release components on the front side of the tablet. Alas, I found nothing, which meant there’s only one thing to do: start fighting glue.