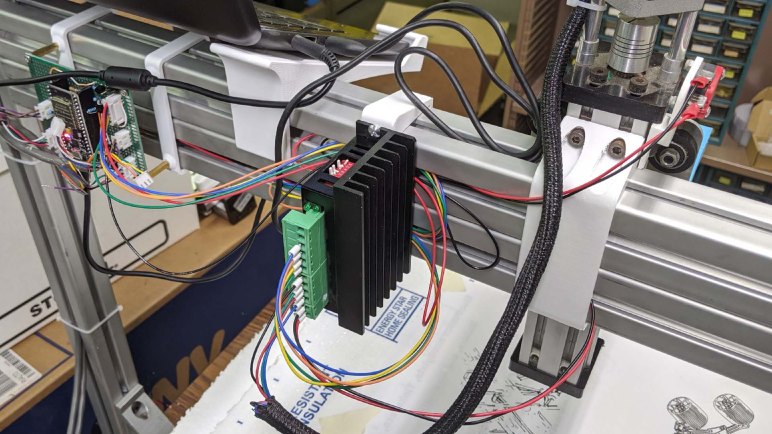 One of the reasons I didn’t design and print yet another iteration of the pen holder was that I thought it was more important to design and print a mounting bracket for the Z-axis stepper motor. Up until this point, the stepper controller module was merely taped to the gantry. This was never going to be an acceptable long term solution. 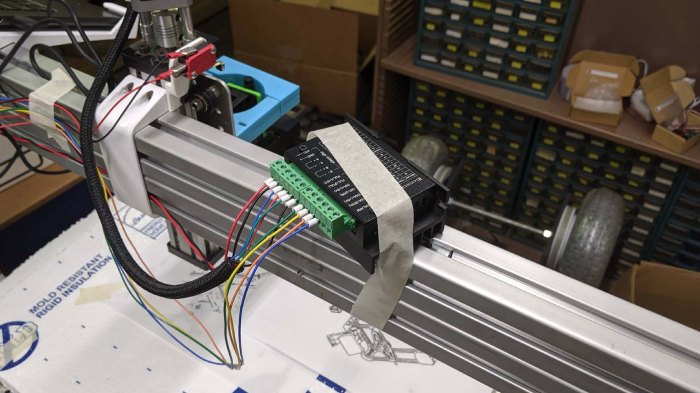 Once the stepper driver was mounted with a proper bracket and tested with the Z-Axis version 3, we removed Zv3 and installed Zv4 in its place. Complete with simple homing switch and parallel link pen holder. For this first test Zv4 was held with the same 3D-printed bracket used in Zv3, though that is already on the list for replacement.

After the fourth Z-axis assembly was installed, I loaded and ran the Sawppy portrait program used for testing the third Z-axis assembly. The Y-axis flex really messed up the plot far more than originally expected.

Pen carriage twist in response to Y-axis load is visible while plotting, especially with rigid aluminum beams in th… twitter.com/i/web/status/1…

After watching the thing mangling a Sawppy wheel, I stopped the test. There was no point in going further. Here’s Sawppy wheel drawn by fixed mount for comparison. 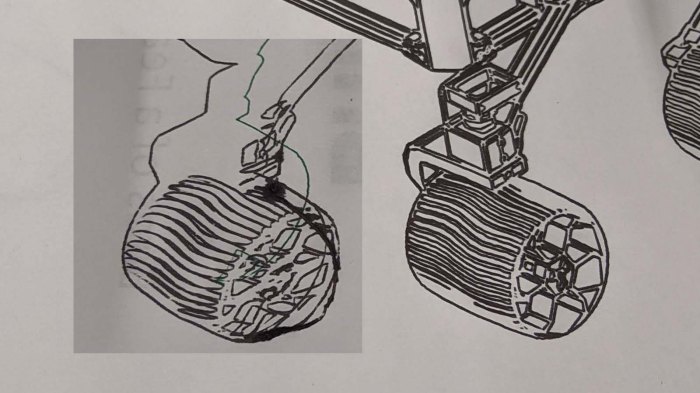 But a beautiful pen plotter was never the point of the exercise. Making the machine act as a pen plotter was merely a way for us to visually confirm that the Z-axis is moving more-or-less in sync with the rest of the machine. So as poor as the new pen plot is, the main objective was accomplished.

The test did, however, uncover a problem with the salvaged Z-axis: the ball screw is bent. Now that it is under computer control we can run it at a consistent speed (better than turning it by hand) and now we can feel a small but definite wobble in the carriage. This would explain why it was retired! This wobble was evidently too much for its previous owner, but it’s still too early for us to give up on it. It is possible the wobble won’t be the biggest source of inaccuracy in this pieced-together CNC mill, and even if it is, we’ve established that this is a common and affordable form factor we can easily replace.

Therefore, we shall leave Z-axis version 4 in place and continue working on the rest of the machine until the wobble proves to be a problem.