After our most recent test cutting session, I wanted to prepare our scrap MDF stock for the next test by milling off everything earlier and leaving a flat surface. And like most tests, there was an unintended and interesting data point: The surface is not flat. Not only that, it was the worst “not flat” yet. Our first cutting session did not result in a flat bottom surface, either, but because there was so much tool chatter, it was hard to distinguish one contributing factor to another. 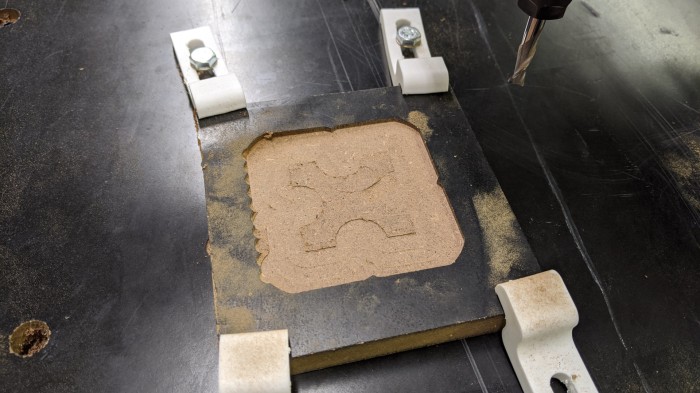 The second cutting session left us a very smooth bottom surface. Since we eliminated the majority of chatter in this session, we thought chatter was a contributing cause and life was good. 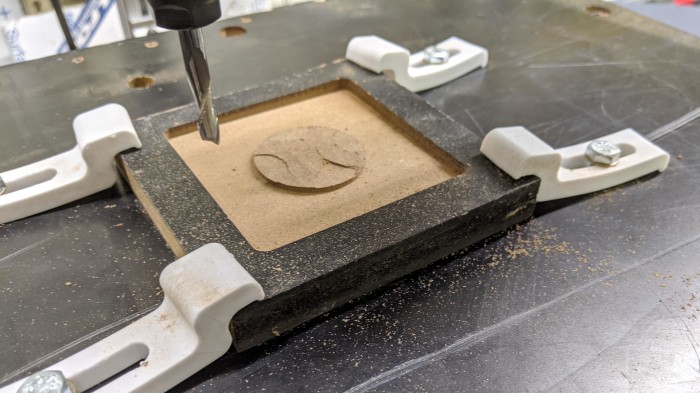 But with the third session’s results in hand, we now know it wasn’t quite that simple. The nasty tool chatter has been mitigated, but the bottom surface is poor. The ridges are consistent with a cutter tilted from vertical axis.

The square-ness of this machine was always a question mark, because it was only set up by eyeballing against a machinist’s square. This is better than most drill presses, but barely counts as a starting point for a vertical mill. MDF is more forgiving than machining metal, so the fact we have three clearly different grades of surface finish means something changed drastically between runs. Well, “drastic” relative to CNC milling norms, where the thickness of a sheet of paper is a big deal. In normal everyday human experience it was pretty small, but still, what caused the change?

After some consideration, we realized we already knew the culprit: our bent Z-axis ball screw. As our cutter travels in the Z-axis, its tilt relative to the table would vary slightly. Since we’ve been using the same piece of scrap MDF, every test session cut slightly deeper than the last. When we are lucky as in the second project’s bottom surface, we find a height where things are very close to square, and we get a smooth finish. Otherwise we see ridges left by our endmill as it cut across the surface while not quite vertical, pushed off axis by the bent screw.

Back when we realized the Z-axis ball screw was bent, we thought we’d use it until it proves to be a problem. We have now reached that point. Between the bent ball screw and loose Z-axis rollers, redoing the Z-axis (for the fifth time!) is moving up on the priority list. But not at the top yet, because even though we’ve identified this limitation, we still have things we can explore.