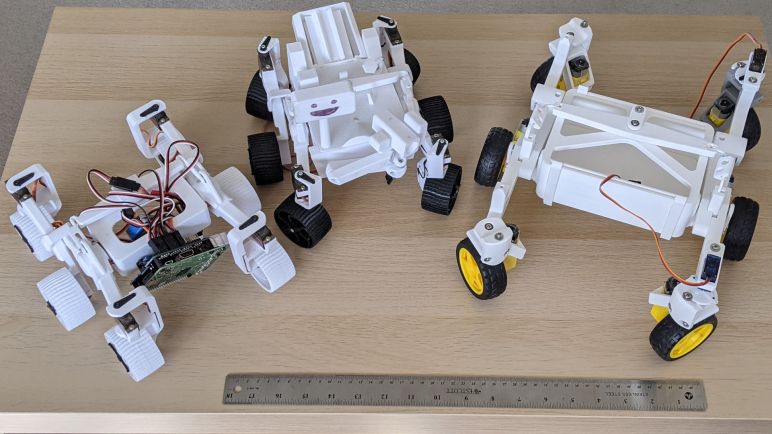 Gaining a basic understanding of how to use the L298N module to control DC motors was an important confidence booster for modifying my little rover plans: Switch the rover’s six-wheel drive from micro servos modified for continuous rotation to a different approach: TT gearmotors that are designed from the start to drive wheels. They even come with one of the most frequent Sawppy requests: soft rubber wheels that are expected to have better traction on earthly surfaces. Steering the little rover’s four corner wheels remain the duty of micro servos, which would be doing their designed job of rotational position actuators.

The first rover chassis to emerge from this new plan is Micro Sawppy Beta 3 (MSB3) shown here next to its predecessors MSB1 and MSB2. Changing the wheel drive mechanism has a huge impact on the overall design, as this family portrait shows. A new rocker-bogie suspension implementation is the focus here, relegating the body back to a simple box as it was on MSB1.

The next few posts will cover some of the highlights of mechanical design changes for MSB3. Changing the wheel drive motor required a completely new steering knuckle design for the corner wheels. Which became an opportunity to design a multi-piece mechanism that would allow me to quickly adjust steering trim at mechanical level. Increasing the number of parts does make the mechanism more complex, but I am optimistic it would actually prove to be easier to build. MSB3 also represented a new way to use 623 bearings that hopefully eliminates the sensitivity to tightening torque. And the revamped rocker features an improved adaptation of the real rover’s rocker deploy pivot allowing the rover to fold up for transport. And finally, the differential linkage is a further evolution of using 3D printing to avoid having to scour remote control hobby catalogues for an adjustable suspension turnbuckle.

This tour of MSB3 starts at the same place as its predecessors, from the wheels. Then we’ll work our way up.