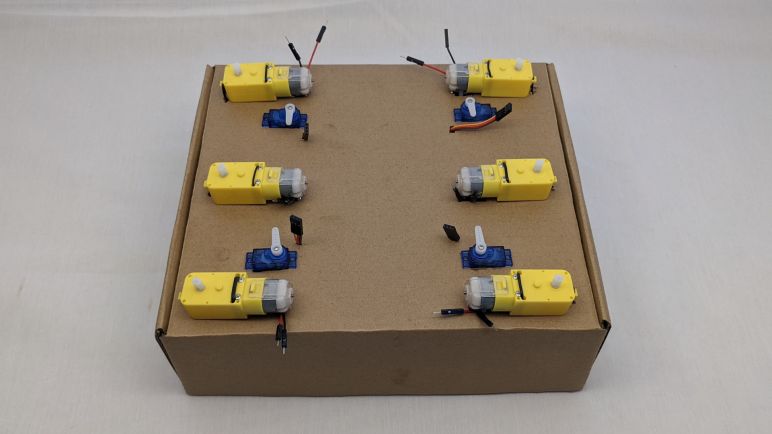 Proving that I could control DRV8833 DC motor driver IC using an ESP32 was the final piece of the foundation I knew I needed before I seriously start building a micro Sawppy rover brain on an ESP32. During my development of this software, I will need a physical chassis to test code on. While I could go straight to my Micro Sawppy Beta 3 (MSB3) chassis, doing so has the risk of breaking physical robot hardware. Anything from a servo moving beyond intended limits, to embarrassing mistakes like driving the rover off the table.

A safer option is to have a representative testbed with fewer risks than a physical robot. For my original Sawppy rover, I removed all ten LX-16A serial bus servos and laid them out on a table. I found that a line of servos wasn’t very good at conveying system behavior, since I had to do some mental spatial transforms in my head to interpret those servo movements. Some bugs slipped through this process because I made mistakes in my mental visualization. From that experience I thought it would be better to have a testbed that better represented the physical layout of the rover chassis, and this is an opportunity to put that idea to the test.

In line with my recent discovery of cardboard for mockup purposes, I pulled a cardboard box from my paper recycle bin. I turned the box inside-out to give me some clean note-scribbling surfaces, plus I’m not advertising that product on this site anyway. Holes were cut in the cardboard so I could use twist ties to fasten six TT gearmotors in the same relative location as they would be on a rover. I also cut four rectangular holes for the steering micro servos. Since I cut those holes by hand, the imperfections of the manual cut gave the servos enough friction to sit in place without any fasteners.

Wires for all of these components went into the box, and small holes were cut so they could poke through to this top surface. This routing keeps all excess lengths of wire out of my way making for a neater work area. The ESP32-based control board, whatever it ends up being, should fit in the center area I kept clear for it. Excess wire isn’t the only thing I kept in the box, it was also a convenient place to store all the related auxiliary pieces related to the project. Each micro servo has a plastic bag with spare control horns as well as their mounting screws not needed for the testbed. And each gearmotor came with a wheel that’s not strictly necessary for the testbed. There’s a chance I’ll want these wheels later, to better visualize relative rotation velocity of the wheels. If that should occur I know where to find the wheels: they’re in the box!

But first I need to get started with Sawppy ESP32 software.